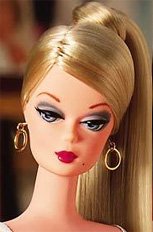 The #1 Lingerie Silkstone came as a blonde doll, and the #2 Lingerie Silkstone is the same doll as a brunette.  The brunette seems to be a little harder to find. They are both Limited Editions and came wearing only a white satin bra and panty ensemble trimmed with white lace and pale pink bows, white stockings and garters.  These first edition Lingerie Fashion Model Barbies (#1 & #2) are considered to be the most valuable of the Lingerie Silkstones.