Vintage Stacey Dolls were introduced in 1968, as Barbie's new "cool" Mod friend.  She hailed from the Mod Mecca of hipness - Great Britian.  There were two versions - TNT (Twist 'n Turn) and Talking Stacey with a British accent.  Between 1968 and 1971, there were three different TNT Stacey versions and two different Talking Staceys.  Through the years, Stacey had three different hairstyles - the TNT version had a long ponytail in 1968 and a short bob from 1969 to 1971.  Talking Stacey had a side ponytail.  She was permanently retired after 1971. 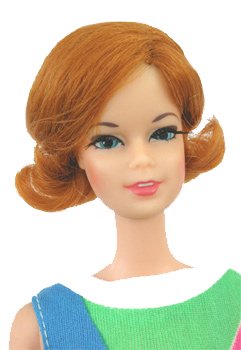 After Vintage Barbie Dolls, Stacey remains among the most popular and desired dolls among collectors. This along with the fact that each version was produced for only one to two years and therefore harder to find than other dolls, makes her one of the more valuable dolls to acquire.

There were two different gift sets produced.  Both were Sear's Exclusive Sets that included a TNT Stacey and an ensemble with a Stacey tag.

There were two versions.  The one pictured on the right, along with the inside of the case is much harder to find.

The Stacey face sculpt was
also used for Malibu Barbie.

A vintage reproduction of
Stacey Nite Lightning
from 1969 was released in 2006.  Only 7,700 were produced
worldwide making it a popular addition for Collectors.

See on eBay or Amazon