Steffie doll was introduced in 1972 as Barbie's.  The Steffie head mold is still in use today and is one of the most popular Barbie faces ever produced. 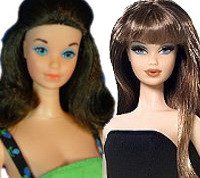 There were only three Steffie dolls and all three were released in 1972.  They are:

The Steffie Doll face has been a popular influence.

Although there were only three Steffie Dolls made, her face has been and continues to be one of the most popular.  It is considered by many to be one of the most beautiful Barbie Doll faces and many Collectors concentrate almost exclusively on Barbie dolls with the Steffie face.  The Steffie doll head mold and face was used for these dolls:

International & Dolls of the World