Vintage Ken doll, Barbie's Boyfriend (and ultimate accessory!), was introduced as the first addition to the Barbie family of dolls in 1961.  Just as Barbie was named after the creators Elliot & Ruth Handler's daughter, Ken was named after their son. Like Barbie, although his look and style evolved through the years, he always had a killer wardrobe and an ensemble for every occasion!

Vintage Ken dolls proved that a sharp dressed man
was the ultimate accessory for Barbie.

Kenneth Sean Carson was Ken's full name.  Although Ken was not as popular as Barbie, he had several same sized friends through the years that shared his wardrobe. Check out this list of all Ken dolls and clothing including pictures and descriptions. 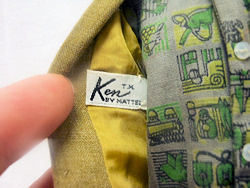 <-- All Clothing items made for Ken from 1961 to 1972 have this Black & White Cloth Ken™ tag.
--> Fashions that have been reproduced have a tag with a "B" and says reproduction.

Except for In Training and the Fashion Paks, all of Ken's ensembles from the previous two years were carries over into 1963 and nine new outfits were added.

With 12 new outfits, in addition to four Travel Costumes, three Little Theater costumes and 11 Fashion Paks, 1964 was an exciting year for Barbie and Ken.  The 13 ensembles that were carried over from 1963 were re-numbered, with a zero placed before the original number.  Sleeper Set (#0781) was changed from brown to blue stripes and Casuals (#0782) changed from a yellow to a striped shirt.  Ken also got a new best friend, Allan.

Ken and Allan both received upgraded new bendable leg bodies.  There were six new ensembles for 1965, along with 13 outfits carried over from 1964, with Roller Skate Date, Goin' Huntin' and American Airlines Captain undergoing small changes in their accessories.  12 Fashion Pak items were continued from 1964.

1966 represents the height of the "glam years" for Ken and Barbie.  The ten new outfits introduced this year are some of the most sought-after Ken ensembles and also the most valuable.  There were also 12 Fashion Paks carried over from 1964.  There were no new items introduced for Ken in 1967, these were all carried over. 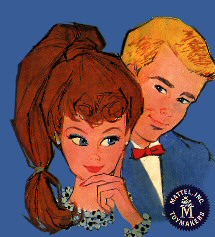 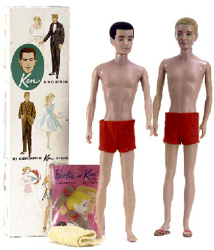