A reproduction of this dress as a part of Easter Parade was included in the
1994 35th Anniversary Gift Set. 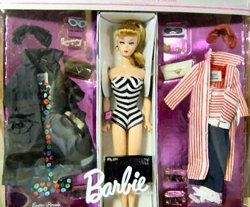 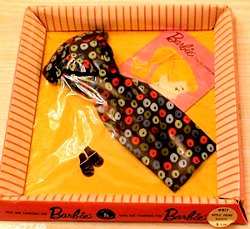 When a Collector becomes captivated by a particular outfit, the goal becomes to find more items featuring that one thing.  Fortunately, the most popular fashions made an appearance in multiple places.  Here are some fascinating ways that the Vintage Barbie Apple Print Sheath Dress made its mark.

1961 Barbie Doll Cases
The Vintage Barbie apple print sheath dress was pictured on these 1961 cases - a Train Case and a Hat Box Case - made by Ponytail. These are some of the earliest cases made, but are surprisingly still available today and can be quite affordable.

1961 Barbie Hatbox Case Ornament
QX6922
A replica of the 1961 Barbie Hatbox Case was issued as a Hallmark Keepsake Ornament in 2001.  The ornament featured three ponytail Barbie dolls modeling popular fashions of that time period.  The Vintage Apple Print Sheath Dress was in the middle, with Evening Splendour on the left and Suburban Shopper on the right.  Its lid opens and closes and also includes a carrying handle. 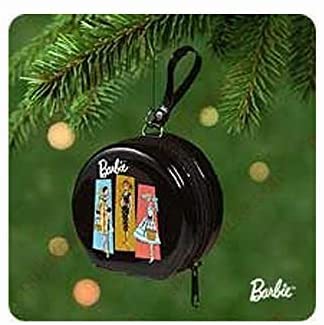 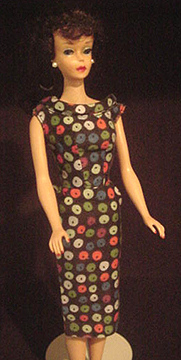