Vintage Barbie Bubblecut Dolls were produced from 1961 to 1967.  There were many hair and lip color variations, as well as variations in the fullness of the hairstyle.  The first editions tend to have a tighter bouffant hairdo than do the later releases.  With hair style playing a major role in the value of a doll, the distinctive bubblecut makes this doll a valued addition to a Barbie collection.

Good to know...
Some vintage Barbie bubblecut dolls may have complexion problems.  Shiny or greasy faces have developed as a result of the breakdown of the vinyl used.

Now you can know too...
all about vintage Barbie bubblecut dolls.


Vintage Barbie bubblecut dolls
boasting a new hair style with a side part.

In 1964 and 1965, Mattel released a Bubblecut Barbie with a new hair style.  The side thatched rooting pattern made the distinctive side part difficult to unpart.  These dolls were sold in Europe and Canada, but not in the United States.  There are also transitional dolls that have a side part and the American Girl face. 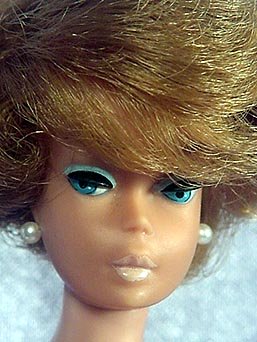