Vintage Barbie Gay Parisienne combined couture design with elegant accessories to create one of the most successful designs of 1959.  The dress is deep blue rayon taffeta.  Same fabric bows trimmed in white adorn the hem in front and the top of the zipper closing in the back.  The hat is a matching blue tulle veiled headband.  The white faux fur stole is identical to the ones seen in later ensembles, except it is lined in white satin (later ones are lined in pink).  The small gold velvet clutch has a gold bead closure and is lined in white satin. This vintage ensemble is rare and hard to find, as it was only produced in 1959.

Barbie's wardrobe was designed to reflect the most chic trends of the time and Vintage Barbie Gay Parisienne was no exception.  Inspired by Parisian couture and glamour of the late 50's, this ensemble became an iconic piece of Barbie's wardrobe.  And with that popularity, Collectibles featuring Gay Parisienne were destined to follow.  Many of these items are limited making them an enjoyable challenge to find in some form or fashion.

Gay Parisienne Reproduction.
In 2003, Mattel issued a Gay Parisienne reproduction with all the same pieces and accessories as the 1959 original.  Part of the Collectors' Request Collection, every detail of the original ensemble was wonderfully re-created. 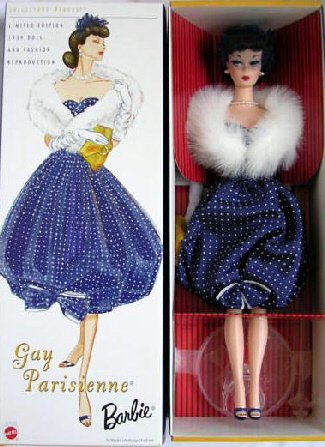 Gay Parisienne Ornament.
Dated 1999, this handcrafted Keepsake Ornament was released by Hallmark.  It was sixth in the Barbie Ornament Series and beautifully portrayed this iconic fashion. 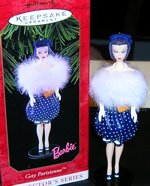 Porcelain Gay Parisienne 1959.
Released in 1991, this beauty is a reproduction of the original 1959 doll and the Vintage Barbie Gay Parisienne ensemble.  Part of the Barbie Porcelain Treasures Collection, it was a limited edition and first in a series.  A Certificate of Authenticity, serial number and doll stand came with each doll.  The attention to detail in this fine bisque porcelain doll are undeniable...the arms and legs go up and down, the head does not move, red fingernails, underneath the dress are light blue undergarments to include bandeau style bra and garters. 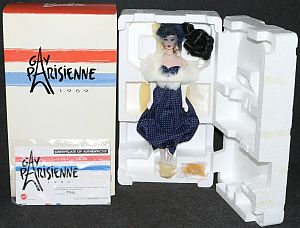 Gay Parisienne Fashion Collection Figurine.
Dated 1993, this beautiful figurine features Barbie wearing Gay Parisienne.  From Barbie with Love Gay Parisienne 1959 was made by Enesco, #353655 and was part of the Fashion Barbie Series.  Measuring approximately six inches tall, the figurine came with its own stand. 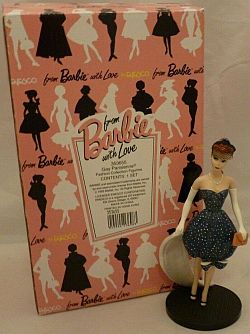 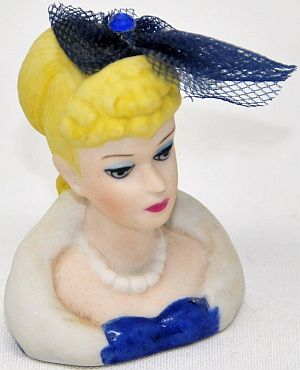 Polyresin Frame.
Dated 1996 and made under license by Matrix, a picture frame was issued featuring Barbie wearing Gay Parisienne.  Part of the From Barbie With Love Collection, the Polyresin Frame held a 5" X 3-1/2" photograph. 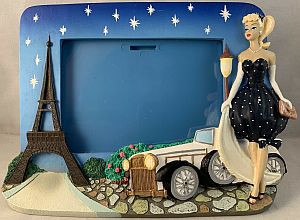 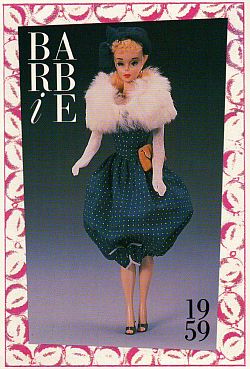