Vintage Standard Barbie Doll was the new "TNT" face on the standard body (original, "non-TNT"), released from 1967 to 1971.  She did not twist at the waist or have bendable legs like the Twist 'n Turn Barbie.  Collectors referred to this doll's body as a straight leg, standard.  Another difference between the Vintage Standard Barbie Doll and the TNT was the price.  The Standard was less expensive making her the "budget" Barbie without sacrificing style.

There were three gift sets issued that featured the Vintage Standard Barbie Doll.  Each embraced the Mod Era with bright colors and outlandish fashions.  Take a look at the bold fashion statement these gift sets made. 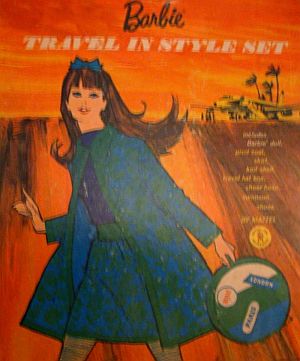 Barbie Twinkle Town Set #1592
This Sears Exclusive Twinkle Town Gift Set was released in 1969.  Standard Barbie was featured wearing the same 2-piece swimsuit as the original doll, but this time in aqua blue.  The set also included the Movie Groovie #1866 outfit that was also sold separately and is pictured below. 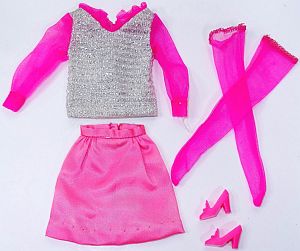 Barbie Loves The Improvers
This may very well be the rarest gift set of all.  Standard Barbie was featured wearing a pink 2-piece swimsuit and a cardboard dress that looked like a tin can, proving that Barbie could look good in a tin can!  Oddly enough, there was a cut out for Barbie's belly button that didn't exist.  Produced as an Inland Steel Container Company promotion, this doll was never released to the public making it an extremely rare find.