Notes:
Later versions did not have the Skipper name on the body.
Collectors often refer to this as SL Skipper (for straight leg).

Along with release of the Vintage Straight Leg Skipper doll in 1964, came vinyl doll carrying cases.  The first cases were scaled to fit Skipper and her junior sized wardrobe.  Many collectors find these vintage Skipper doll cases captivating and fortunately are still available today.

In 2018, a Limited Edition Barbie Hallmark Keepsake ornament featuring Skipper was issued.  This ornament captures the moment in time when Barbie's little sister was first introduced.  Skipper is wearing the same one-piece red and white swimsuit originally issued in 1964. 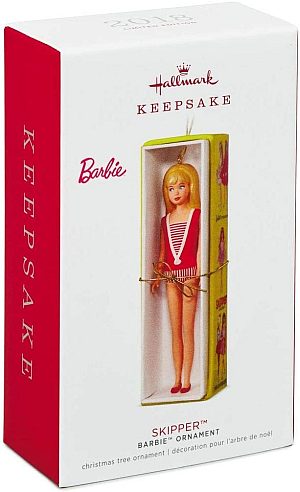