I have seen several blue cases like this, but I have a pink one. Is the pink one more rare? This is a ponytail case with the Barbie pictures, but only says doll case on it. I can find no information on this item.

Hi Sheri -
This is the first Barbie case made - from 1961. It is marked with the manufacturer's name - Ponytail. They were made in several different colors with slight variations in the graphics. These are fairly common and not particularly valuable.

You can see them here - 1961 Barbie Ponytail Case

Barbie Heirloom Service Playset? Is this a rarity? This is a child size plastic silverware set. The top of the box, which isn't pictured here, has a graphic of a ponytail Barbie and it reads Barbie Heirloom Service Playset. I have searched eBay and can't find anything like it. Does anyone know anything about it, including what it may be worth? The box is in pretty rough condition. There is one spoon missing. The rest looks unplayed with. Thanks! I found in a Barbie lunch box at a garage sale a bunch of small Barbie booklets (10) that have 1958 in Roman numbers on the front. I can tell that they are old by the glue tape on the front and back of some. They all are in good to excellent shape. I found two versions of this booklet the backs are different and then there are ( 6 ) Barbie and Ken booklets too also in good to excellent shape. Some of the booklets have a separate paper with "The Barbie game 1960 AD" and some with a paper "Barbie Sings 1961 AD". The question is how do I tell what I got here and from what years?

Thank you for any help
Paul 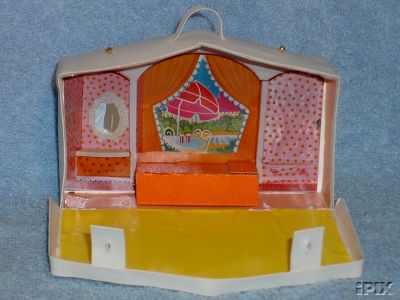 Please can you help to identify this little vinyl house, I have it for many years in my collection, it is not a Tutti playhouse or a Hallmark ornament or a keyring pendant. On the pic you can see the relation to Barbie size, vintage Malibu Barbie holds it.
It is made of white vinyl outside, the closures and the handle are made of the same white thin vinyl, it is for closing with 2 gold buttons similar to the buttons used on the vintage Barbie outfits. Inside is 2 dimensional except the bed or sofa in front of the window. There are no painted carpets or anything else inside. Is it possible that it was a part of an old dealer display? Is it of any value? Thanks for help, Angela

Hi Angela -
I have never seen anything like this - Maybe someone else will know. I do know that full size cases that did double duty as rooms/doll houses were common in the late 1960s, early 1970s. From the dolls pictured and the outfits they are wearing, I would say this is from the late 1960s.
But other than the Hallmark ornaments, I have no clue!
Suzanne

New Hallmark Barbie Ornament for 2010- outfit I have never seen As I am sure you are aware, Hallmark makes a few Barbie ornaments each year. This year, there is an ornament called Movie Mixer. It is a blonde ponytail Barbie wearing a sleeveless pink dress which I have never seen before. Have you ever seen or heard of this outfit? Hi- I received case of beautiful Vintage Barbie items dating through 1960's. This blanket was included. It might be homemade-but it's made so well. It's seams are perfect and the lettering looks professional. Is this item made by Mattel? Thanks for anyone's help!

Hi Lois -
I think it is homemade, but such a treasure none-the-less! The Suzy Goose bedspread was pink (I think there might have been a yellow one as well) and I have never seen or heard of one of these.
Suzanne I bought a grab bag of Barbie accessories and my seven year old daughter and I are trying to identify what we can. We believe these to be mostly from the 70's and 80's but can't find any of them in photos of dream house sets, kitchen sets, etc.

Can anyone identify any of our finds?

Did these Barbie items come together in a set or with a doll? These items are from my childhood. The makeup compact was always my favorite item. I think the yellow snap wand was what held the little pink sponge in place, which you used to apply the makeup. The barrettes have scratch-n-sniff strawberry and grape stickers on them. Did the barrettes come together with the compact? Did they come with a particular doll? Thank you!

I was sold a #1 Barbie stand that is not hollow but has a wooden insert under the plastic. Were there ever #1 stands like this? It is black plastic with 2 metal prongs and says Barbie TM By Mattel.