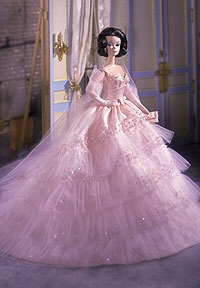 In the Pink features short brunette hair and a vintage Barbie inspired face. She is wearing an elegant beaded floor-length ball gown that is made of pink taffeta and organza and is adorned with tiny pink and clear Swarovski crystal beads. She is also wearing a pink tulle petticoat and stole, pale pink pantyhose, evening gloves and pink shoes. Her accessories include faux pearl bracelet and earrings, and a clutch purse. 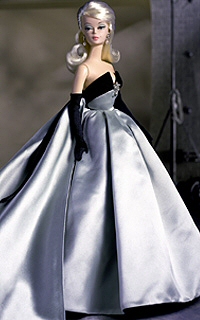 Lisette has platinum blonde shoulder length hair - the front part is pulled back with a black bow. SHe has light green eyes and pale pink lips. She is wearing a pale mint green strapless gown with black accents and an attached cape that featured black ribbon detailing. She is also wearing a black tulle petticoat and black pantyhose. Long black gloves and black Mary Jane heels. She is also wearing faux pearl and rhinestone jewelry.

Here are the current listings on eBay:
%%%eBay Code%%%