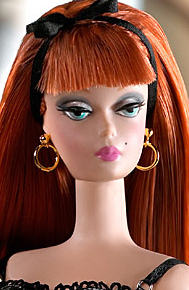 She has long red hair with bangs (she is the only Silkstone Lingerie Barbie with red hair). She also has a black ribbon bow tied in her hair like a headband.

She has the same style gold hoop earrings as the other Silkstone Lingerie dolls, which are very much like the ones Barbie originally wore in 1959.

She is wearing a short pearl-grey satin slip that is trimmed with black lace. She has sheer black thigh-high stockings and black high-heel shoes with ankle straps.