Barbie and the Rockers Reproduction 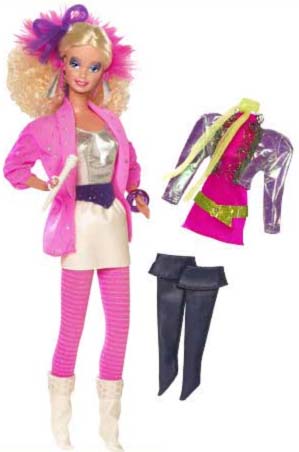 The Barbie and the Rockers Reproduction is a reproduction of Rocker Barbie, first released in 1985. Barbie's Rock Band members were Rockers Dana, Dee-Dee, Derek, Diva and Ken. There were two issues of the Rocker Dolls (except for Ken), the second versions were released in 1986.

Rocker Barbie is the quintessential late-80s "Rock Chick" with her big hair, jacket and leggings (the only thing missing are the shoulder pads in the jacket!). She comes wearing one "rocker" ensemble and another one is included in the giftset.

This is the last in the My Favorite Barbie series, a series of six vintage Barbie reproductions to celebrate Barbie's 50th anniversary. It was released in 2009 with a retail price tag of $39.95.