Sunset Malibu Barbie was one of the most important Barbie Dolls of the 1970s.  She was sold through 1977 and defined Barbie throughout most of the 70s.  Representing the "California Girl look," she was an instant hit and was enormously popular.  Part of her new look was the use of a Stacey head, instead of a Barbie face.

Malibu Barbie was such a big success that soon Barbie's friends were enjoying California tans.  Decked out in sunglasses and swimwear, a beach or pool party was bound to happen.

This vintage doll case takes its inspiration from Malibu Barbie.  There is one space for a doll, one drawer, and one area to hang clothes.  The vinyl Beach Party doll case was issued in 1979 and is hard to find. 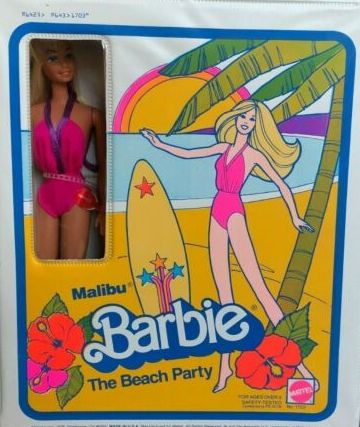 In 2003, Hallmark released a Malibu Keepsake Barbie Ornament.  Intended to honor the original 1971 doll, this ornament debuted wearing an aqua blue swimsuit with sunglasses in hand.  This ornament was #10 in the Barbie Collector's Series. 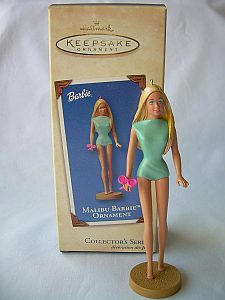 In 2002, Hallmark issued a Malibu Barbie Lunchbox Keepsake Ornament.  This Club Edition metal ornament came in a clear, plastic box and is considered a rare find.  When the Lunchbox Ornament has the miniature sunglasses, suntan lotion, beach ball, fins and beach bag offered in the original set inside, it is even more valuable. 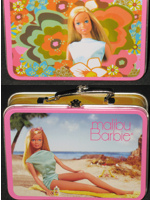 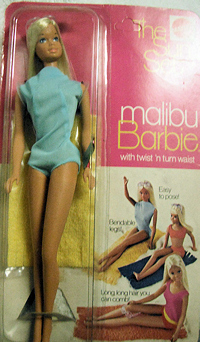