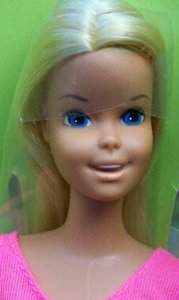 Sun Set Malibu Francie Doll (1971 - 1977), was a member of the wildly popular Malibu Barbie line up. Unlike the others, there was only one Francie edition. Instead of the Francie head, she had Casey's face and a tan TNT body. There were three different boxes through the years - all are pictured below. She was originally sold on the card from 1971 through 1974. Between 1975 and 1977 had the white box and pink box (as did all of the other malibu dolls). 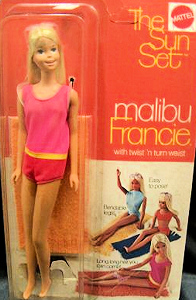 Hair:
Long (mid back length) blonde hair with side part.

Tell us what you think! Leave a comment in the box below (outgoing links will be removed).
Resources