Vintage Barbie Orange Blossom was Barbie's stylish bridesmaid dress that captured all the essence of the sixties.  Often shown worn by Midge, this outfit was influenced by other successful Barbie fashions.  The yellow tulle hat was the same design as Gay Parisienne #964 and her bouquet was like the one in Wedding Day #972 with yellow and white streamers.  Here you will find more details about the bridesmaid dress that was perfect for an extra special wedding.

In the sixties it was customary for the Flower Girl to match the bridesmaids and Barbie's wedding was no exception.  Barbie's little sister, Skipper, served as the Flower Girl in the wedding party.  Skipper's dress was an age appropriate version of Vintage Barbie Orange Blossom.  Click here for more on Skipper's matching ensemble Flower Girl #1904 (1964 - 1965) . 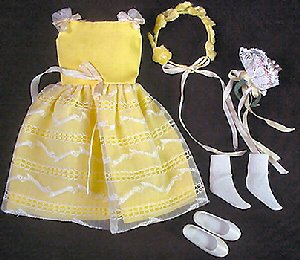 Just wondering...I admit I could never figure out why a yellow dress is called Orange Blossom, I mean even if orange blossoms are yellow, they are still called orange right? Why not Lemon Blossom?