Ricky doll was introduced in 1965 - due to Skipper's tremendous popularity, in 1965 she got two same size friends - Skooter and Ricky. Ricky was "the boy next door" and all three were playmates. All three dolls have the exact same body and it can be interchanged between dolls and they can all wear the same clothes. Ricky is one of the few Vintage Barbie friends/family to have his own wardrobe (for obvious reasons). In all, he had six ensembles - all are described below.

Ricky Doll Fashions were sold from 1965 through 1967. A total of six ensembles were made for him. (Details are below.) 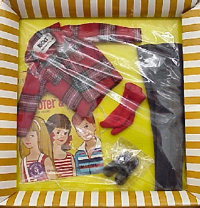 Yellow 2-piece Cotton Pajamas with White Collar and "R" Initial on Pocket
Blue Terry Bathrobe - there are two different variations - one is a darker blue, both are pictured
Blue Terry Slippers 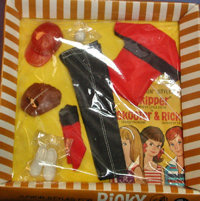 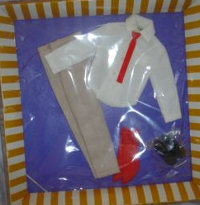 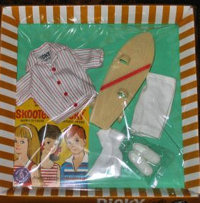 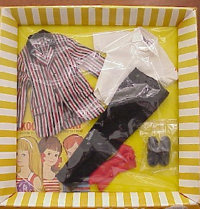