The Suburban Shopper dress has a full skirt and back zipper.  Because of the hardy fabric and the five year run, this dress is easy to find. The accessories are also fairly easy to obtain, although it is rare to find a hat in mint condition, as they are prone to unravel around the edges.

This adorable cotton sundress and big straw hat is such a great representation of casual wear in the late 50s, early 60s.  It is not a surprise that the Vintage Barbie Suburban ensemble was featured in additional collectibles.

The Suburban Shopper 35th Anniversary Midge Ornament joined the Hallmark Keepsake Collection in 1998.  Commemorating the 35th year of Midge, it featured the Suburban Shopper ensemble.  This collectible ornament was sculpted by Patricia Andrews. 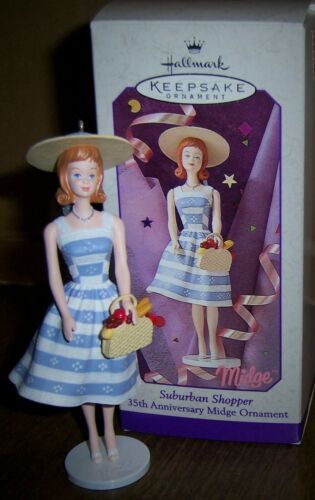 The Suburban Shopper ensemble also appeared on Barbie Doll Carrying Cases.  The 1964 doll trunk pictured below featured a titian Midge doll modeling Suburban Shopper, while Barbie was wearing Country Fair.  These trunks were made in black, white and blue. 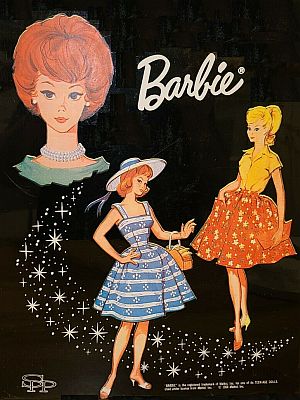 These 1961 vinyl round cases featured Vintage Barbie Suburban Shopper as well.  The fashions featured from left to right:  Evening Splendour, Apple Print Sheath, and finally Suburban Shopper.  These hat boxes had no compartments and were designed for on the go. 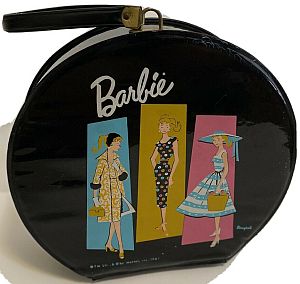 In 2001, Mattel issued a nostalgic Suburban Shopper Reproduction.  The same attention to detail was given to the ensemble and accessories as the original version in perfect conjunction with a shopping trip for Barbie 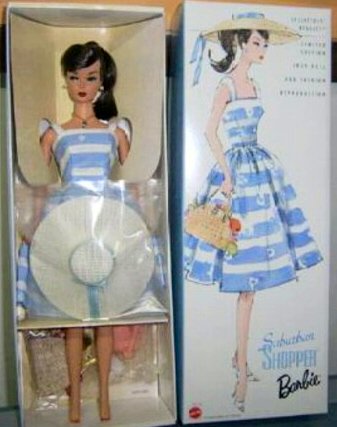 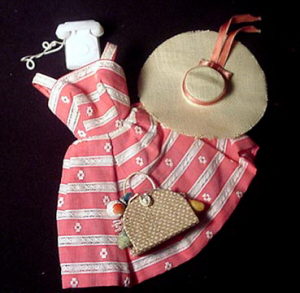